On July 26, 2014, Matt Pollock and I captured this spherical panorama of green airglow, the Milky Way, and star trails over Bar Harbor from Cadillac Mountain in Acadia National Park, Maine. I've shot several spherical panoramas of star trails with my Panoneed robotic panning head, but Matt and I wondered how difficult it would be with a manual panning head. Obviously, we didn't want to be rotating it every 30 seconds or so for 2 hours, so we decided to shoot three 40 minute timelapses with a Nikon 10.5mm f/2.8 fisheye that has had the lens hood shaved off for full frame use, rotating every 120° to capture three stacks of star trails that I blended into a single panorama of star trails. 10.5mm is not wide enough to capture the entire sky, and anything wider is usually f/3.5 or smaller aperture (within a reasonable price range anyway!). Surprisingly, it worked very well!

The sphere consists of 5 photos of the sky blended with 4 photos of the ground, plus another 249 images for the star trails (3 x 83) layered on top. It took about 22 minutes to shoot the Milky Way and ground from 11:30 – 11:52 PM, and 2 hours of shooting star trails from 01:06 – 03:07 AM. In between we shot some dark frames and tried various shutter speeds and ISOs for ideal exposures, and setup the dew heater on the lens so it wouldn't fog up. We’d been battling with fog and clouds for a few nights in a row and almost gave up on this night as well, but decided to stick it out another hour or so and we were rewarded when the fog suddenly lifted after 11 PM. We had three other cameras, tripods, sliders, and remotes in the truck that we really should have set up to shoot some motion-controlled timelapse video, but we were too busy looking at the stars and chatting all night to think about any of that!

Software used: Edited with Lightroom, stitched with PTGui Pro, and blended with Photoshop. Pixel Fixer was used with a dark frame to remove hot pixels from long exposures at high ISO. Star trails were stacked with Advanced Stacker Plus. 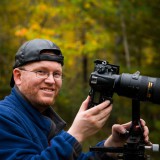